Today we have a guest blog by Dave Ott:

As most of you have heard, the Tracker School was called in recently to track a potentially armed murder suspect fugitive in Waretown NJ on February 22, 2014. The suspect was a passenger in a car pulled over by a Waretown P.D. officer for some traffic violation. During questioning outside the vehicle he threw his ID down on the ground and ran into the woods behind (west of) the Sea Pines Motel on route 9. This occured around 11:30 a.m. Suspect still had his wallet and a mobile phone. A foot chase ensued, involving several officers, a K-9 unit and a helicopter. The area into which the fugitive fled was typical for the Atlantic coast pine barrens – sandy soil, oak and pine trees, areas of thick scrubby understory, more open areas of seasonally wet/dry marshy areas with small shrubby plantlife, sand trails used by off-road vehicles, and numerous game trails throughout. This initial search was not successful, and calls were made to the Tracker School at about 2:30 pm. Jorge Brana (senior instructor at the Tracker School) immediately left his house and went to the Waretown PD headquarters, was briefed, and headed out to the scene with one of the officers. Jorge messaged Tom Brown jr with a situation report, and then called David Ott (Tracker student & Tracker School’s multi-media producer) and Cadence Shae (former Tracker School intern and onsite engineer for Tracker Audio) to assist since he knew we were nearby at the Tracker office.

When we arrived (around 4:00 pm), Jorge had already identified some very clear prints of the fugitive and was working on his trail, establishing baseline strides and characteristics and trying to get into the fugitive’s head. The area was heavy with interference from the initial searchers and K-9 unit. Two of us kept on the tracks and one went ahead speed tracking, looking for the furthest confirmed print. We continued in this manner as daylight began to fade, eventually using flashlights, and we reached a point where we couldn’t be sure where the tracks went off into the bush. Lots of sign cutting…

At about 5:40 pm Jorge left to pick up Tom at the trail-head, and arrived back at the last known track around 6:00 pm along with an additional Waretown PD officer. As soon as Tom looked at the last known track he yelled for us to assume wing positions and took off like a bloodhound on the trail. Tracking (with flashlights) continued off of the sand trail into the brush at high speed, with Tom occasionally pausing to point out the fugitive’s actions, or comment on the general environment of the area, or calling for the wings to cut for sign when the next track wasn’t apparent. This intense tracking eventually led us back towards some businesses along route 9, where we met the K-9 unit and additional officers. The tracks were getting pretty hard to see, though it looked like the fugitive was heading back into the woods… and he had about 1-1/2 hours jump on us. Tom thought he was headed towards a local landowner’s property along route 532 and suggested that the Waretown PD send a car or two there to check it out (I don’t know if this was done). The helicopter support had not shown up yet, and it was decided to take a break and see if the patrol cars (and helicopter, when it arrived) flushed anything out or noticed anything unusual. It was about 7:30 pm or later at this point.

Jorge, Cadence and I returned to the Tracker office to eat, do tick checks (yes, they were out!) and debrief. At about 9:00 pm Jorge received another call from the Waretown PD dispatcher – that same local residence that Tom suspected the fugitive would head for had just contacted the police with a report of something strange about a person who had just asked to use their phone. The suspect had evidently called a cab company…  At this point the Waretown, Barnegat and Lacy PDs were all involved with the search. We headed back out towards the residence on route 532, made initial contact with a Barnegat officer who wondered where our dogs were (“You’re trackers? Where’s your dogs?”), and got ready to track again. Then the bad news came. We hadn’t even all gotten out of the vehicle when the Waretown PD informed us that the fugitive had already been picked up by the cab and dropped off at a nearby bus station. So we headed back and called it a night.

So that’s the bones of the story. What I really wanted to write about was everything else… our personal thoughts on the whole thing, why this experience would yield a lifetime of lessons to Jorge, Cadence and me, and what we’d like to share with the Tracker community in general.

“In the learning environment of a class we are removed from the actual application of the skills. This tracking case made the skills come alive and the responsibility we have to use them. We have to put ourselves out there. Be vulnerable. Make it really count. It’s about helping, about making a difference. Learn from our shortcomings and failures. We need to get beyond learning in a class and seek to train on the job. Test ourselves. It’s not how this will matter some day, it matters now.” – Cadence

A basic theme to a lot of our post-case discussions centered around being more prepared. And you won’t know how well prepared you are unless you can test in a real world scenario or close to it. This includes not only things like your tracking pack and general equipment, but your skill set. Take stock not only of what you need to work on, but also what you already know. Valid confidence in your existing abilities is just as important as the desire to learn more.

Another item was communications ability. Know your area, know who you can call upon for help, and let others know how you can help.Tracking by yourself is really hard. Having a few more people really sped things up. Having Tom around puts things in hyper-speed, but that’s not always an option 🙂

On tracking with Tom:

“I saw everything that I had learned at the Tracker School put into practice in about 2 seconds.” – Jorge

It was an experience that is hard to capture in words, witnessing one of the few true master trackers in action. His immediate command of the situation and his speed and focus were even more remarkable for his overall awareness of the landscape and the time he took to continue our own education in tracking. At times it seemed as if he wasn’t so much letting the last track lead him to the next – he was just putting himself where the next track was. And on the few occasions where it wasn’t there, he could just call on his wings (we were more or less the classic diamond formation) and be off again in seconds. You graduates of the Philosophy classes will have some thoughts on this, I’m sure…

Being in the field:

Speed is vital but useless without a solid understanding of the objective (or fugitive, in this case). The time you spend on that understanding is directly related to your skill set, and to a lesser degree your equipment (bear in mind the more you know, the less you need to carry). Your skill set is determined by your accumulation of dirt time. So get more dirt time!

Being out there, all three of us dealt with personal frustrations, feelings of inadequacy, fatigued eyes, and keeping the adrenaline rush under control. To counteract all that we fell back to the basics – the stuff you learn at the Standard, Advanced Standard, Advanced Tracking, Philosophy 1 and Scout. We knew what to do, and we each assumed positions to take advantage of our strengths and minimize our weaknesses. There was no ego involved, and that was a beautiful thing.

As can be expected, many of our conversations were about being more prepared. Between the three of us we have maybe 25 to 30 years experience with the Tracker School and a lot of dirt time, but not one of us felt like we had done enough or been sufficiently equipped. Always more to work on. And though it centered on tracking, it’s just as much about being an effective human being.

There’s not one primitive skill I can think of that doesn’t have corollary benefits to us in our everyday lives. Let the ego slip away for a moment and ask yourself “what strengths and values do I have to offer those around me?”

As Tracker students, we all know that when something was truly important to Stalking Wolf and his people, it was often labeled “sacred”. Our first example of that is in the “Sacred Question” – asking WHY? Or in other words, “What does this mean?” And as Tom has said, the biggest failure is the failure to ask it. Never stop asking why – never be satisfied that you have exhausted the learning potential of anything. Jorge and Cadence went back Sunday night and then Monday as well to get pictures and more thoroughly examine the tracks. The time they spent there was invaluable in understanding not only the fugitive’s trail, but the impact of the prior searcher’s interference tracks as well as our own assumptions and decisions in the heat of the chase. We gained some new insight into getting good track pictures at night (Jorge’s Stanley BarFlex LED light worked really well) and re-discovered the value of popsicle stick track marking (Jorge picked up some bundles of surveyor’s flags which were great for a broader look at the scene). One of my favorite pics is where the dog, confused by the nearby water amongst other obstacles, loses the direction of the scent and starts following the fugitive’s tracks backwards. 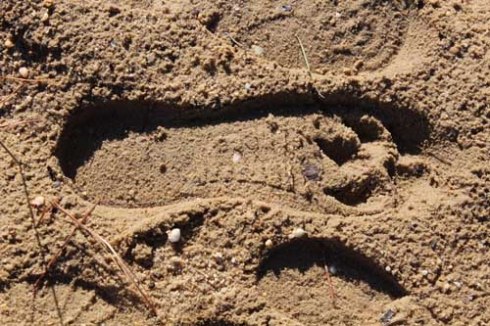 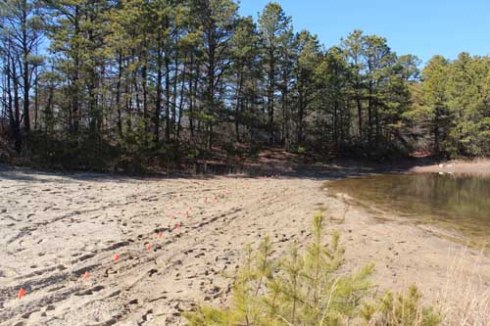 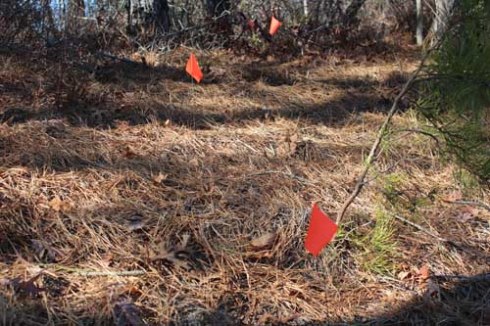 So we go back, revisit the scene, refine our understanding, try out some new perspectives and different tools and technologies, and prepare to be even more effective in the future. Most areas of our lives could benefit from the same procedure.

In closing, I don’t think I’ve really written anything here that you haven’t heard before… but if you’re like me, it sure helps to get a reminder once in a while. For Jorge, Cadence and me, tracking a dangerous fugitive with Tom has been a very big reminder.

Dirt time. Play the game. Be prepared. At every moment its up to you to live an honorable and effective life. At any moment it may be up to you to protect one.